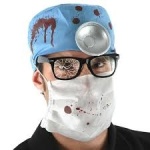 It’s been said many a time that I am a wimp. No argument from me. Particularly so when it comes to Doctors. Needles and being pushed and prodded are not my thing. Mind you I am not on the same level as my son Aden who once, when needing to be jabbed with a needle, screamed so loudly and panicked in such a way that the Doctors simply gave up. Tell a lie … I did that once at the Dentist when I was 7. I still have immense satisfaction of the pain that I must have caused the dentist when I bit his finger. My dislike of Doctors has meant I stalled in making the appointment to be referred for a cochlear implant assessment. Today I made that call.

My fear of all things medical is not helped by the fact that I have subscribed to the Facebook page – Cochlear Implant Experiences. Now I recommend this page to absolutely anyone who is considering an implant. It gives a wealth of information about the experience of having a cochlear implant. Most of it is good but every now and then someone makes a comment that scares the BeJaysus out of medical wimps like me.

There was the comment about the watery eye. Apparently some fellow who had had the implant said he woke up from the surgery with a watery eye. He mentioned it to the Doctor who thought nothing of it. When his eye waters he rubs it, this no doubt makes it worse. The fellow is asking contributors to the page whether they have experienced the same. At the time of writing he had not received any responses. I’ve added his experience to the growing list of questions I am going to ask the Doctor once I get in for my assessment.

Then there was another comment about post surgery pain. Some poor fellow was on Vidicin for a few weeks and now cannot sleep. The word pain sent me into a cold sweat. The responses were not to encouraging for a wimp like me. Nonchalantly one person responded that her pain lasted three to four weeks and that such pain is quite normal. “Take it easy”, she advises. Pain and duration is another question I have added to my list.

Then of course there are personal experiences. One of the reasons I am considering an implant is because I miss music. I have a memory of sound and I have phantom music in my head all the time. My three lads will attest to this cos on the weekend I was forever singing along to the phantom music. Chrissy Amphlett of the Divinyls died last week so currently the phantom music is old Diviynls songs. All weekend I have been singing – “LOVER, LOVER, WHY DO YOU PUSH, WHY DO YOU PUSH, WHY DO YOU PUSH, BABY, BABY, DID YOU FORGET ABOUT ME …” in what I consider my best Chrissy impersonation. I reckon all I would need is her famous sailor dress and suspenders and I would really look the part. My lads beg to differ.

The other comment that intrigued me was the one relating to whether or not one should have two implants. Apparently some people are advising against it because of developments in restoring hearing through growing inner ear hair cells. One does not know exactly how far down the track this might be and there is an argument that having two implants is beneficial. For example having two done reduces rehab and can make mapping easier if the implants occur close together. Apparently adapting to two can be difficult depending on the time between implants. So many scenarios and so many questions. The one vs two question and the developments in inner ear hair cell growth will be top of my list of questions to ask.

Then there was the totally bizarre comment that one person woke up from surgery and everything tasted like metal??? The person making the post wanted to know how long that would last. Apparently it can go on for as long as two years but eventually goes away. Another said that everything taste of soap! It is clear that this is a temporary thing that varies from person to person that “takes as long as it takes..” to get better. Last night I cooked the most wonderful Rhubarb and Apple Crumble. The thought of something as marvelous as this tasting like metal – EWWWWWWW – Another question to ask the good Doctor.

I guess I am fortunate  because there are more than 100 000 people with cochlear implants globally today. This means that there is a wealth of information out there that can help me to make my decision. It pays to get informed and I am doing my best to make sure that I am. It is human nature to perhaps get engrossed in the negative but nevertheless by the time I get assessed I intend to have a virtual book load of questions to ask.

For those that are wondering, today the 29th April 2013, I have an appointment with the Doctor to set up my referral for an assessment. So stay tuned as I update you all on the progress of my journey.

11 thoughts on “Getting Informed … My Cochlear Implant Journey.”