Oh how I laughed when I first saw this video. It is a brilliant send up of all those emotionally manipulative videos that try to inspire us. You have little kid sitting on mums lap. Either they are turning on his/her hearing aids or their cochlear implant is about to get switched on.  The eyes of young kiddie light up. Mummy says. “I love you” and tears abound. The headline invariably reads, “Child hears I love you for the first time”

And people buy into this you know. They want to believe that miracles do happen. They want to believe that sad, tragic deaf kid has been fixed. Sad tragic deaf kid is now like everyone. NORMAL. They can hear and at that very moment their life just suddenly became enriched and worthwhile. Saved from the tyranny of silence.  How wonderful. Except it isn’t.

Now, don’t get me wrong, I am not anti-cochlear implant. Many of my friends have implants and love them. Golly, if they break down or are forgotten, for many of my friends this is akin to near death. There are many young people that I have worked with who have done wonderfully well with their implants. They have great language development. They are educated and confident. The implant is a great thing. Australians are rightfully proud that it is an Australian invention.

And we should celebrate this. It is a good thing. BUT – what we should not do is mislead. These videos of kids at switch on time are misleading to the extreme. It never happens like this. Switch on time is just the start of a long and exhausting process to learn how to hear with an implant. It does not happen straight away.

As a friend told me. The switch on is traumatic. It is traumatic because all you hear is noise. I am told that initially it is not pleasant. It is even irritating. For some the sound is so horrible that they burst into tears. For some it is a sound that they can not countenance and they do give up simply because they hate it.

For others it’s just the start of their battle to hear. It takes resilience, patience and hard work. When it works it is fabulous. When it doesn’t it’s frustrating, For some they feel like a failure. Their hopes raised so high and to not be able make good use of their implant after the pain of surgery, it is a very frustrating and traumatic thing.

Some kids grow to hate their implants and do away with them when they are adults. Some are bitter that they were forced to have the implant. I have known some so angry and bitter that they have had surgery to remove the device. As an interpreter friend told me once, switch on time is often one of shock and tears. It is not a time of joy.

For all these reasons videos like the one below are dangerous. They raise unrealistic expectations and, at worst, set people up to fail. They give parents a false hope and do not tell the story of the long hard slog to able to hear using the implant, This is just wrong.

As an advocate for deaf people over many years I have always wanted to ensure that people get accurate information so that they can make informed choices. Nothing offends me more than the hearing world promoting an idea that deafness is a tragedy.

Sure for some it is, especially latter deafened people who must learn to adjust. The onset of deafness can be socially isolating and lead to social withdrawal and severe depression. But Deafness is not always that way and it does not need to be that way. The experience of deafness is varied and for many a very positive thing.

For many years I have witnessed and had to work with language deprived young people who are deaf. I have had to work with language deprived adults as well. I have seen their struggles to be educated, get a job and to be involved in the world on an equal footing. It is a tragedy that really need not happen. It is not for nothing that the late and great Oliver Sacks described deafness as a preventable form of intellectual disability. (With apologies to readers and friends who will find the latter statement upsetting.)

Usually this happens because parents are given false hope that technology and hearing aids will provide all the answer. More often than not this is not the case.

Sure I understand hearing parents wanting their deaf child to be part of their world. I even understand Deaf parents of Deaf kids wanting their Deaf kids to be able to hear as well as they can so that they can be part of both worlds. But to ensure this happens accurate and realistic information needs to be shared. False hopes and media beat ups like the above video need to be avoided.

Recently Deafness Forum Australia, to my immense disappointment, shared such a video on Facebook. For an organisation that represents both Deaf and hard of hearing people to share such a video is unforgivable. Thankfully Deaf people and hearing professionals from all over Australia let them know how appalling it was to share such videos. Deafness Forum sensibly removed the offending video.

That they shared it in the first place tells me that the culture of the organisation is becoming increasingly audist. Indeed their Hearing Health campaign, needed as it is, is nearly all about hearing and prevention of deafness. This is why I am no longer a member, It disappoints me because as an ex-Board member I know that the Deafness Forum of old would never have countenanced sharing misleading information such as the above.

But realising their error they took it down so kudos to them for that. Let us hope that they have learnt their lesson and never again consider sharing such biased and misleading videos that are akin to hearing propaganda. 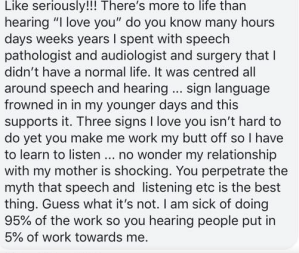 And that is the reality for many! Poor form Deafness Forum, lift your game.

2 thoughts on “Up The Garden Path”