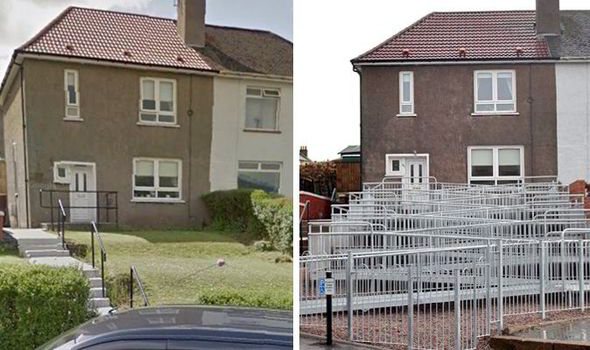 Early in the year I read an astonishing story about an access solution. This solution was implemented in Britain. A young girl with a mobility disability lived in a council flat. The mother of the daughter had been pleading for two years with her local council to install a ramp for her daughter to make it easier to access the home. After two years the council decided to act and installed a ramp. The solution, as the picture shows, was quite bizarre.

In their wisdom the council basically dug up the front lawn of the house and installed a 10 level ramp at the cost of around $73 000 AU. Said the mother, “There must have been a better solution. The council could have gone about the whole project in a more sensible way” In their defense the council brought up the age old furphy of ‘building regulations’. A more likely explanation is that it is bureaucracy gone mad. Meanwhile the local skateboarders are apparently putting the ramp to good use.

I don’t know what it is, but it is often that disability befuddles the bureaucrat’s brain. Access provision for them often has no rhyme or reason. I once attended a major disability conference. The conference provided Auslan interpreters. Apparently someone had requested access to captioning also but was told no because access was being provided through Auslan interpreters.

Now people that use Auslan as their primary mode of communication in Australia, according to the 2006 census, number 7,150. My trusty online percentage calculator tells me that 7150 makes up POINT 186, that’s .186, of all people with a hearing loss. One would have thought that greater access to the greater number of people with a hearing loss could be provided through captioning. But no, Auslan interpreters are somehow seen as the solution for all. Of course one would hope that both interpreters and captioning would be provided and not just one or the other. But if one were to have to choose between one or the other one would think that captioning might offer the more flexible access. Logical? Yes it is, but disability access is rarely logical. But a conference for disability? A major one at that – You expect them to know these things.

Just yesterday I asked disability colleagues, specifically deaf, to email my previous place of work. My previous place of work run a number of regional cinemas. When I worked there I convinced my work to offer captioning and Audio-description to provide access for people who are deaf and also vision impaired.

Now I am quite knowledgeable of access to the cinema, having been involved at one level or other with the Action on Cinema Access campaign. I fully understand the limitations of the various technology and also the preference for open captions by the majority of people who are deaf. Naturally, I strongly advised my place of work that they should focus on open captions. For the vision impaired I suggested that they install the technology that is required for Audio-description because the reality is that there are not really any other options for people who have a vision impairment.

Unsurprisingly, despite possessing knowledge that few others have, my place of work tried to tell me I was wrong. They first told me that Open Captions were no longer possible. I provided them with examples to show that it actually was. I referred them to the Action on Cinema Access Facebook page so that they could see the numerous examples and arguments that state that OC was indeed possible. I showed them a video shot on my phone of the open captions being shown for recent movie release that had occurred the previous weekend. Despite the overwhelming evidence my place of work still insisted that it was not possible. Apparently that’s what their film distributor had told them.

Later they accepted that Open Captions were indeed possible but they insisted that captioning had to be offered through closed caption devices, in this case caption glasses. They reasoned that open captions spoilt the viewing pleasure of the hearing audience. I urged caution and suggested that they organise trials and get feedback from both hearing and deaf viewers. Firstly I said ascertain that hearing viewers actually find Open captions off putting. Secondly I suggested they get feedback from deaf patrons as to the effectiveness of the devices.

The first meeting about captioning access occurred in October of 2012. Eventually they organised trials of technology in August 2013 and promptly cancelled. They later organised another trial of the technology in November 2013. Bewilderingly they tested the technology on staff people who were not deaf or vision impaired. On the basis of feedback from these non-disabled staff they decided that the technology was not very good.

Through all of this I had advised of the general loathing of the closed caption devices by people who are deaf and even of the problems with audio-description but they chose to ignore my advice. Their priority, they said, was the viewing pleasure of the greater audience. On this basis they decided to purchase the closed caption technology. They purchased the technology from my budget, which was state government money and not their own. The reality is that there was no financial outlay on their part.

And so …. Just before I was about to sign off on the purchase of the equipment they contacted me and said they wanted to organise a trial with some people who were deaf and vision impaired. They wanted this organised in three days because the equipment they had on loan needed to be returned. They had only had the equipment for nearly 12 months or so and had not thought to organise a proper trial with ’consumers’ in this time. This is despite several emails from me urging them to do so.

Dutifully I organised the trial with five people who all reported problems with the technology. Caption drop out, sound drop out of the audio description and even captions showing up from the wrong movie. But … they purchased the equipment anyway. I approved it because it was either some access or none. They did acknowledge that there may be a place for some open caption showings. However, by this time I trusted them not at all.

SOOOOO … Soon after I left. Regularly I have been checking their website to see when the caption movies would be offered. The equipment order had gone in at the start of February 2014. By Mid-August 2014 there was no sign that any captions were being offered. In despair I put a post on the Action on Cinema Access Facebook Page urging friends to contact them to find out when caption screenings would be offered.

The next day my previous place of work actually responded to my post. (A staff member had noted my post, they had joined the page previously on my recommendation.) They proudly stated that in September several screenings of a movie with Open Captions were to be offered. The screenings would offer Open Captions, I kid you not! Intrigued I made some enquiries to find out what had happened with the closed caption devices. This is the reply that I got.

“We have the first open caption screenings happening with xxxx in Sept and plan to offer a closed caption film in Oct. We are seeking audience feedback at the screenings so in turn are offering them as free sessions.” They want to trial the closed captioning technology because …. “We wish to ensure the experience is best for all and not to promise something that we can’t deliver.”

So having spent some considerable amount of money on equipment that I had already advised them was not popular they, “…wish to ensure the experience is best for all and not to promise something that we can’t deliver.” In the meantime they are offering Open Captions as advised back in October 2012 and after having insisted that open captions were not possible. Meanwhile the expensive technology is gathering dust somewhere. And still there is no word as to what is happening with Audio-description!!!!

Then there was the story of the $15 000 or so an organisation paid to a consultant to tell them the same things they had been told by a staff member but chose to ignore. Or the organisation willing to offer a $2 200 registration fee free to avoid paying $800 in interpreting! The mind boggles!!!!!

Yup – bureaucracy gone mad. Who would want to have a disability!