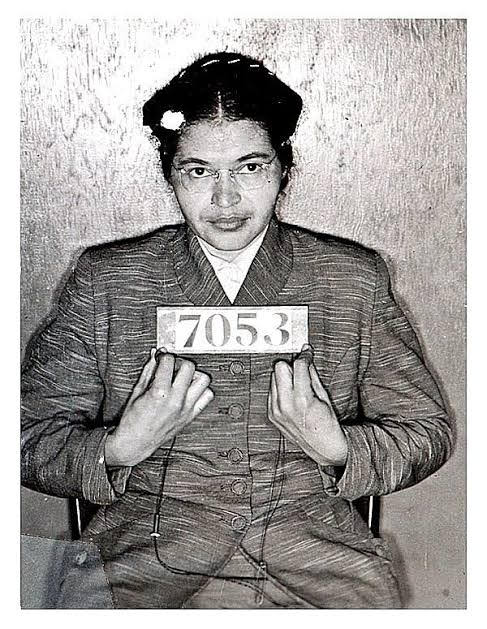 Shall I tell you what the real evil is? To cringe to the things that are called evils, to surrender to them our freedom, in defiance of which we ought to face any suffering.  Lucius Annaeus Seneca 5BC – 65AD

One of the most poignant moments in recent history is the image of American athletes, Tommy Smith and John Carlos giving the Black Power salute during a medal ceremony. With their black gloved salute, fist defiantly held high, they took the world by storm. But what is absolutely poignant is that this unforgettable moment in history was inspired by a radical Black woman who refused to give up her seat on a bus.

It is interesting to look at the Black Power movement. Of course this was the 1960’s a time when protest and civil unrest was rife. In the 60’s the power of television was just starting to hit home. Protests were beamed live to peoples homes in all their glory. The Kennedy assassination was seen by millions. Martin Luther King was stirring the masses and he too was assassinated. Riots seemed an everyday occurrence. The 60’s were a time when people were not going to accept second best. The evils of segregation, racism, sexism and war were challenged head on. And television beamed it, often live, direct into people’s living rooms. The influences of these protests were immense. The Black Power salute was an extension of these protests.

But let’s get back to the lady on the bus. Often it is just a single act of defiance that can spark the cause. Rosa Parks is a case in point. Parks is the famous Black woman who refused to give up her seat on a bus. This was in 1955 when segregation in America was law. So ridiculous were these laws that Blacks were expected to enter buses through the back door. As the story goes Parks was tired after a long day at work. She was asked to leave her seat by the bus driver and refused. She was arrested and sent to jail.[1]

To cut a long story short she was bailed out of jail and as a result of her defiance Blacks boycotted the Montgomery Bus Service. This was no small thing because at the time Black men apparently made up 75% of the patrons. Lack of patronage meant that the bus service either changed its policy or potentially went out of business.  Interestingly Parks inspired the establishment of Montgomery Improvements Association that was headed by none other than a young Martin Luther King. This simple act of defiance created ripples that were to be felt in every corner of the globe.[2]

Closer to home Australia has its own famous acts of defiance. One of the most well known is the Aboriginal Tent Embassy. The Tent Embassy was established in 1972 on the lawns of Parliament House in Canberra. It started with a simple beach umbrella set up by Aboriginal Activist, Michael Anderson, Billy Craigie, Bertie Williams and Tony Coorey. It was in response to the Liberal Government of the day who refused to grant land rights to the Aboriginal communities of Australia. Instead they offered a lease system that was conditional to Aboriginal communities showing they could make economic use of the land. This economic use did not extend to the rights to the natural resources of the land such as minerals or forestry.[3] Michael Anderson spoke to the press and pointed out, “‘The land was taken from us by force … We shouldn’t have to lease it … Our spiritual beliefs are connected with the land’.[4]

From this humble beach umbrella the Tent Embassy grew to a point where at one stage more than two thousand people resided there. The Government Minister for Aboriginal Affairs of the day, Peter Howson, described the protesters as “unrepresentative militants”. So incensed were the Liberal Government about the Tent Embassy that they actually changed the law on public access to Parliament House lawns. The change in the law allowed police to forcibly remove the Tent Embassy.  Attempts to forcibly remove the Tent Embassy led to violent clashes between police and protesters. Eventually the courts ruled in favour of the protesters and the Embassy was re-established. (It was to be re-established several times over the next 4o years.)

This single act of defiance by four Aboriginal men brought attention to Aboriginal Rights like never before. Importantly it led to unprecedented public and political support to their cause. The tents themselves were symbolic. They represented, “a discomforting visual presence which reminds governments and people, from Australia and elsewhere, of a continuing Indigenous underclass with more health problems, less education and a much shorter life span than other Australians.”[5]  The Tent Embassy was not just about land rights it was about the whole sorry situation and abuse of Aboriginals by White Australians since White settlement. Sadly, despite gains in land rights, this abuse continues today.

Social change comes about because people refuse to accept mediocrity. It comes because people get tired of trying to negotiate with Governments that constantly fob them off with rhetoric.  Sometimes the spark for social change is something simple like Parks not being able to sit on a bus or the deaf not being able to see a movie. But either way a simple act of defiance that shows that people like Rosa Parks are not going to accept second best can be a catalyst to real social change.

“Follow the path of the unsafe, independent thinker. Expose your ideas to the danger of controversy. Speak your mind and fear less the label of ‘crackpot” than the stigma of conformity.”  Thomas J Watson, early CEO of IBM who is largely credited with leading IBM to be the company it is today

[1] It is interesting to note that this was not Parks first act of defiance. In 1943 she refused to enter a bus at the back as was the law. When she refused to give up her seat she recognised the driver as neing the same one as on that day in 1943.